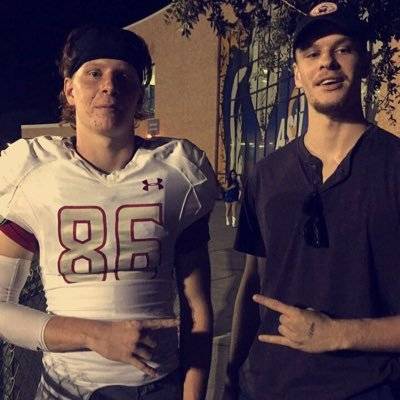 A little about myself. My name is Chance Riden, from Bellvillle, Texas. I'm 21years young and loving life. I have a little orange kitty named Harambe, love football and basketball but really just sports in general. I played football on one of the best teams to play class 3a ball. I went on to play college ball in Oklahoma for Bacone college. Started as Defensive End as a true freshman, left to transfer closer to home and ended up not recieving my transcript and couldnt enroll again. Ended up moving to my childhood city, Houston, TX and started working pipeline construction for about 6 months. The next 6 months I was sent out to Albuquerque, New Mexico with the same company but to go work on another pipeline job up there. During my time up there I listened to local talk radio and Sirus XM. Thatsd when I thought that ebung an on air broadcaster would be the coolest job ever. I looked into some schooling that I could do to earn a certifcate in that feild and thats when I found the Radio Connection. Talked with them, moved back to Houston, and in March I was wokring with my mentor Mike Pearson of Gow Media. As time went on, I found myself going up to ESPN Radio Houston and SB Nation Radio and working with Mike in the studio recording different commercials, newscasts, sportscasts, weather forecasts, public service announcements. The more I would record at my house and at the studios I learned more and more  on how to deliver and say certain things depending on what the topic or message was. I was gathering, writing, recording, and editing everything. Using Adobe Audition CS6 to edit the audio. I would go to football games and events held by ex players like Ricky Williams to gather information to report it. DJ shows, sports news, interviews, and going out to analyze and gather info was my favorite things to do. I produce and engineer music and have a podcast show called "Stick Talk", all on my soundcloud under "Slimzilla" account. My main goal and focus is on getting a career in the broadcasting industry doing whatever it is that I can help out with and eventually get on air and get my own show.